Posters in Minibuses Provide Media Literacy for Moldovans On the Go 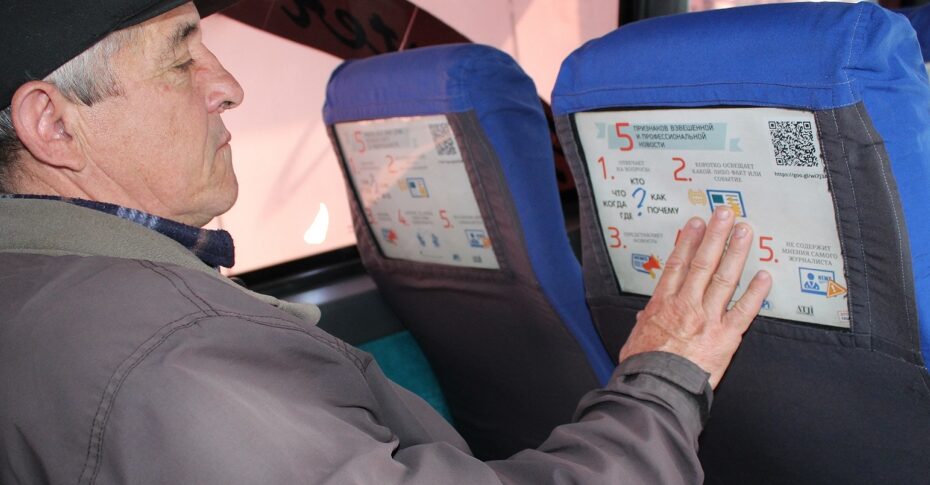 Moldova is the poorest country in Central Europe, and according to Transparency International, among the most corrupt. More than 80 percent of domestic television stations are owned by people affiliated with political parties. Moldova continues to face Russian dominance, including in the media space, and has been dealing with an avalanche of “fake news.”

In February, before the parliamentary elections, Facebook removed 168 accounts, 28 pages, and eight Instagram accounts from its platforms after it was discovered they were targeting people in Moldova with misinformation and disinformation. This was a result of the efforts of journalism organizations in Moldova that are fighting the problem.

Coming at the issue from another angle, in March, Internews launched a six-month media literacy campaign targeted at under-informed rural communities and aimed at arming citizens to identify truth in the media.

The campaign provides on-the-go media literacy information to commuters and other people in transit by placing media literacy infographic posters on minibuses throughout the country. This form of public transport carries passengers between the capital and remote cities and villages as well as across all three regions (the northern, central, and southern parts) of the country. As part of a literacy media campaign in rural Moldova, posters were placed in minibuses used by commuters.
Translation: Five Indications of Unbiased and Professional News
1. Answers the following questions: what? how? why? where? when? who?
2. Focused / short reporting on a fact or event
3. Presents something novel
4. Refers to at least two independent sources
5. Does not include the opinion of the journalist

Some passengers welcomed the mini-bus initiative. Others questioned why media institutions that manipulate consumers haven’t suffered any legal consequences. Several young passengers mentioned that they had no time to read the posters as they were preoccupied with other activities like playing games or chatting on their smartphones. The Minibus Campaign was funded by USAID and UK Aid through Internews’ Media-M project.