Media Literacy Can Be Learned at Any Age 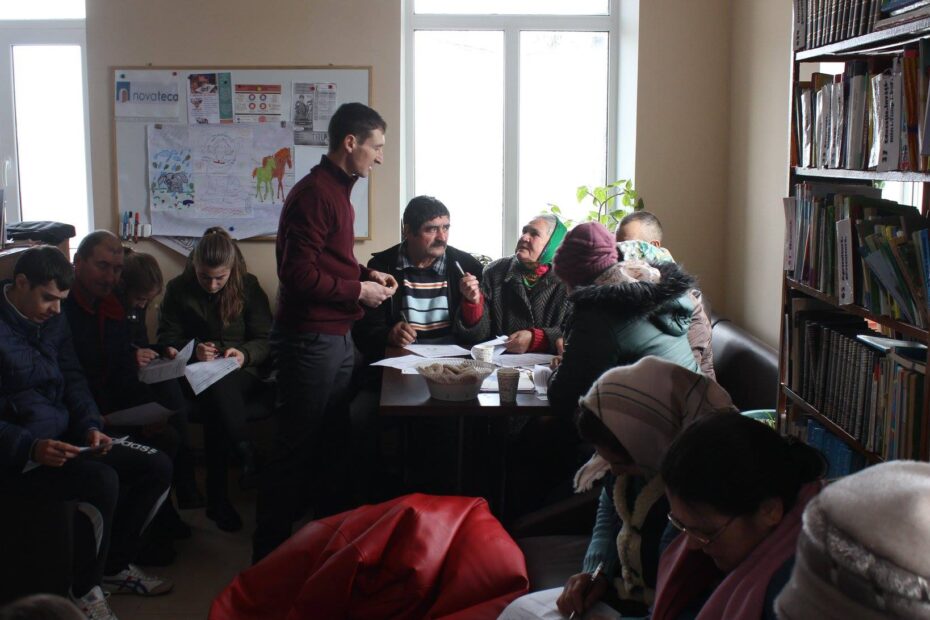 While waiting for pension payments at their small local post office, elderly residents of rural Izbiște, Moldova pass the time the same way people everywhere do – chatting with each other, sharing family updates, news, and a bit of gossip.

Alexandru Rusu, head of the public library that shares a dark hallway with the post office, saw an opportunity in those informal gatherings. With a bit of creativity and a lot of passion, he turned the dark hallway into a classroom, and taught the elders how to combat misinformation and propaganda.

For Izbiște’s population of about 3,000, Alexandru says day-to-day life is pretty routine – villagers manage small farms and provide for their families. “People also worry about the political situation, global, regional and national events. They find out about these things in newspapers, on television or radio, internet and, from the oldest source of information, rumors” said Alexandru.

But, Alexandru says, people lack the time to really analyze all the information to which they have access.

“People are too busy with financial and personal problems. They get information ‘on the go,’ that is, what they have seen, listened to, read in the rare moments of rest, without reflecting much on it.”

This leaves them vulnerable, he says, to manipulated or politically-influenced information.

In addition to the pensioners, Alexandru found creative ways to connect with others in the community on their time – he even conducted a training session in kindergarten for educators and assistants, while the children were sleeping.

“One local man claimed I was creating a political party, saying that I was gathering villagers at the library to collect signatures,” said Alexandru. Of course he had been getting signatures, but only as marks of attendance for participants in education sessions. The rumor spread, he said, because a participant simply confirmed that attendance lists did exist, rather than refuting the idea of a political party. For the rumor starter, the fact of signatures confirmed his belief.

But, ultimately, the community’s new-found media literacy skills won out. “One participant asked, ‘Where did this this information come from? What specific evidence is there for such statements? And, did anyone ask the librarian about that?’”

“The classic answer was ‘I’m just saying what I heard.’” Alexandru recounted, saying that through critical thinking and analysis of information, the participants of this discussion debunked the “fake news” themselves.

Now, the library hosts an informal club of older people, whose members regularly come to discuss with Alexandru the latest events and news from the country and around the globe.

“The library is seen as an oasis of analysis and critical thinking. Everything should be based on arguments, evidence, and multiple sources’ says Alexandru.

He worries, still, that the fight for truth is an uphill battle, thinking of many times he himself was almost fooled by false news. He sees the methods used by those who produce deliberate misinformation have become increasingly sophisticated, and even good-intentioned media outlets fall into a trap of repeating a lie before they report the truth later in a story. Once audiences hear the lie often enough, they begin to believe it.

“During training sessions, we met people who did not even ask themselves whether the news they see on TV is true or not,” said Oxana Iutes, Deputy Chief of Party with Internews in Moldova. “With the help librarians, who have the trust of people in their communities, we have encouraged citizens to analyze everything they see, hear or read; dissect the information that seems strange to them, and document it from the sources at their disposal.” With three elections in the next two years, Oxana says media literacy in Molodova is more important than ever, so that voters aren’t manipulated by fakes and trolls. She takes heart in the work of Alexandru and the other librarians, and by the interest they’ve received from other librarians who haven’t yet been a part of the MEDIA-M project, who want to replicate the trainings in their own communities.

Alexandru hopes the practice will be become second nature for Moldovans. “It would be perfect, if from an early age we can create a culture of educated information consumption, so that with time it becomes a habit,” he said.

Internews’ MEDIA-M media literacy work in Moldova is supported by USAID and UK.